Yesterday’s post featured the October 14, 2010 cover of Chile irreverent weekly news The Clinic,  which appeared shortly after the successful rescue of “Los 33,” the miners trapped in the San José Mine. There were 10 faces on that cover, and I left you with a challenge–a test of your knowledge of Chile’s current events. How many of those people could you identify?
If you haven’t read the original piece yet, go take a look now: Language Play & Politics a la Chilensis.

And now, as promised, here are the answers: END_OF_DOCUMENT_TOKEN_TO_BE_REPLACED

Chile’s alternative  news weekly, The Clinic (firme al pueblo, por supuesto) is a master at attention-grabbing and deliciously irreverent headlines that require a very good understanding not only of Chilean Spanish, but of Chile’s current events. If you’re a foreigner here in Chile, make a point of regularly checking out the covers at your local newsstand—and give yourself a big pat on the back if you get the headlines—it’s a sure sign you’re making progress on your cultural and linguistic Chilensis.

English humor seems to be more language-based than Spanish is. A lot is based on puns, which aren’t very frequent in Spanish, but they do come up from time to time, and The Clinic is one of the best sources for finding them. I spotted this cover a couple of weeks ago and couldn’t resist a giggle. END_OF_DOCUMENT_TOKEN_TO_BE_REPLACED

Where is the fine line between bringing human interest into the news and invasion of privacy? As the world hungered for more of the unfolding story of Chile’s 33 trapped miners, media coverage of this tragedy with a happy ending drew its share of criticism. And now that the excitement has wound down and these guys are heading into the aftermath, I can’t help but reflect on what lies ahead for them.

I hopped into a Santiago taxi shortly before 8:00 PM on Tuesday, October 12, anxious to get home. The rescue mission was scheduled to begin, and I had 33 miners on my mind. I asked the driver about the news. And, as often happens when I talk with cabbies, he gave me something to think about. END_OF_DOCUMENT_TOKEN_TO_BE_REPLACED 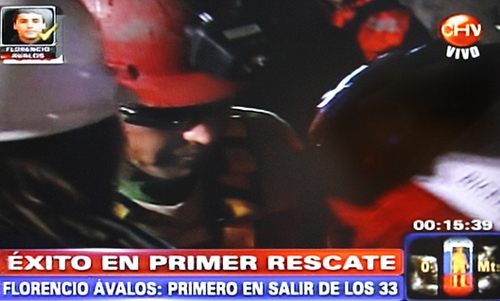 12:15 AM Miner Florencio Ávalos, the first miner to reach the surface

Back Story: Copiapó, northern Chile. A shaft in the San José copper and gold mine collapsed on Aug 5, trapping 33 miners inside. Early attempts to rescue them failed, apparently sealing their fate. Days passed. Hope dwindled. Whispers of “no air,” “extreme heat,” “no food; no water; no light” made the rounds. More time passed. Talk of stopping the rescue efforts began, but the families of these 33 men refused to give up hope.

“They’re miners,” they said. “They know what they’re doing, and they are alive down there,” they insisted. And they were right. END_OF_DOCUMENT_TOKEN_TO_BE_REPLACED