Let’s Call it a Year

Nope, 2011 hasn’t been my favorite year, but I’m putting it all behind me and gearing up for what promises to be a pretty interesting 2012.

Nope, I’m not going to pour out my thoughts on the past 364 days (have pretty much done that already, don’t you think?).

Nope, not going to spill my resolutions for what is to come (would rather just do that as we go along rather than have to explain why I didn’t do this or that after all).

But what I AM going to do:

Here’s Wishing you all One Heck of a Great New Year, and as a bonus, re-share some Chilean tips for improving your shots for 2012:

So, whether you’re watching fireworks at the beach, smooching your sweetie on the dance floor, or watching the ball drop on TV tonight, I’ll be raising a glass of sparkly and saying:

END_OF_DOCUMENT_TOKEN_TO_BE_REPLACED

Christmas is over, finally… and thankfully. A northern gringa’s admittedly biased account of 15 sweltering Christmases in Chile.

Caveat lector: I’m a northern gringa with dreams of a white Christmas who has spent the past 15 holiday seasons deep in the southern hemisphere. I admit it: I long to hear the crunch of the new fallen snow beneath my feet, the whizzing whirling tires of cars stuck in a drift, and the muted muffled hum of traffic on unplowed snow. I miss that oddly bright light that filters through my eyelids as I wake the morning after a heavy midnight

snowfall, and I yearn for the dazzling sparkle of snowflakes caught in the glow of the streetlights. I miss frosty toes and heavy boots and hand-knit mittens and the smell of wet wool and the sting of chilly cheeks that burn after coming indoors. I would gladly brush snow from windshields and shovel a (short) driveway to earn the right to smell–and eat–cookies fresh from the oven and sit by the fireplace long into the night with a good book or sharing a rich red wine while engaged in great conversation… but–alas–I digress. Christmas, in Chile, is in summer.

By now it is clear, you see, that I am certainly not the most objective person in the world to tell about the wonders of Chilean Christmas, but here’s my take on it… as objectively as I am capable.

Chileans celebrate “la Noche Buena” (the Good Night) on the night of the 24th, which is followed by an almost audible sigh of relief on the morning of the 25th once it is finally over. It marks the end of a month of way too many activities all jammed together for anyone to really enjoy any of them.

I never used to be a Scrooge, but even after all these years, I just cannot get used to the idea of Christmas at 90º-plus. I want to wear a big heavy coat while Christmas shopping! But sandals and sundresses are all I can bear these days. Poor Santa (Viejo Pascuero) would love to do the same, although he quietly suffers beneath his heavy red suit and big white beard (an image imported from the north, undoubtedly with much influence from Coca Cola). But I must say I did better this year. Last year my husband threatened to deport me to the North Pole, where I’m sure I would have been happier. But somehow I coped better this year: there was no pouting, no tantrums, and, for the first time in my life, no tree. I cut the fuss to a minimum and let the chips fall where they may-a very useful strategy, I might add… 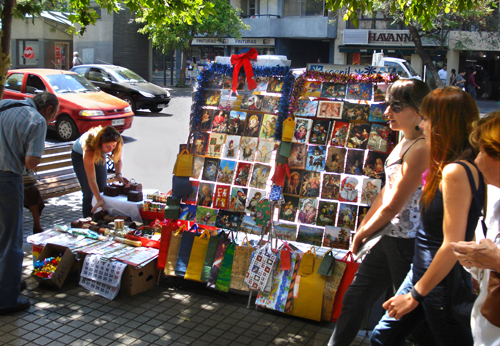 Aside from my own cultural expectations associated with wintertime traditions, it’s also a matter of just too much going on at once. It’s sad to say, but people in the southern hemisphere get ripped off by having most of the year’s major events all jammed together: it’s the end of the school year (along with exams, graduations, college entrance exams, college applications, all at the same time). It’s the end of the working year, and because it’s summer, vacations are just around the corner (most people take 3 weeks in February). It’s also wedding season. Once we get to March, everyone is exhausted and broke and staring at credit card bills, back-to-school expenses, and mandatory March car registrations, and another 9 long months of work and winter til it all starts all over again!

Christmas sales are brisk on the streets of Santiago

Yes, it’s the Scrooge in me coming out. And there’s more. I think it would be easier to handle if there were more holiday customs and traditions, but there really aren’t many it seems. Traditionally people set up a nativity scene and today many people also have a table top tree in the house (fresh cut trees are forbidden). Sure, there are lights spiraling up palm trees and draping big leafy trees in some sections of town. Some people seem to like playing Secret Santa (don’t get me going on that one!) and there’s Cola de Mono (yummy milk-based punch with a kick) and Pan de Pascua (Christmas bread), of course, but the overall feeling just seems pretty commercial.

Most people work til midday on the 24th, and then run out to finish their Christmas shopping (see the pictures of Providencia on the afternoon of the 24th). The traffic jams are phenomenal and you can count on a minimum of 45 minutes at any check-out counter in town (the nice thing is that stores wrap presents for you). Then it’s rush home to gather the family and make the mad dash to the extended family dinner and present-opening ceremony at midnight.

But then, as fast as it started, it’s all over. The 25th is the day after, much like New Year’s Day… Everything comes to a screeching halt, everyone kicks back a few notches, and Santiago becomes a wonderful place to be until March. (Note to travelers, early January is a good time to come!)

For a more romanticized version of a Chilean Christmas, check out:  http://blogs.nationalgeographic.com/blogs/intelligenttravel/2008/12/celebrating-the-season-santiag.html

Soon it will be New Year’s Eve, and that’s a whole different story. And even though I want a white Christmas, I really LOVE the green New Year’s… but that’s another tale to tell! (See New Years a la Chilena)