Cachando Chile readers know I love graffiti–good graf–and spend a lot of time photographing it. Today we have a guest post from Marmo–a long-time Cachando Chile friend who lives in Temuco and who took up the cause, his camera and a pen to share a bit of the Temuco graf scene. Thanks Marmo!

END_OF_DOCUMENT_TOKEN_TO_BE_REPLACED

Yes, I’m getting a late start on last week’s challenge, but better late than never! This past week’s WordPress Photo Challenge theme was Old, and having just returned from Italy, I had plenty of “old” to choose from, but I wanted to shoot for the less obvious, so how about this: Old Graffiti!

END_OF_DOCUMENT_TOKEN_TO_BE_REPLACED

Santiago de Chile–city full of nooks and crannies and little secrets right under your nose–no wonder I love it. 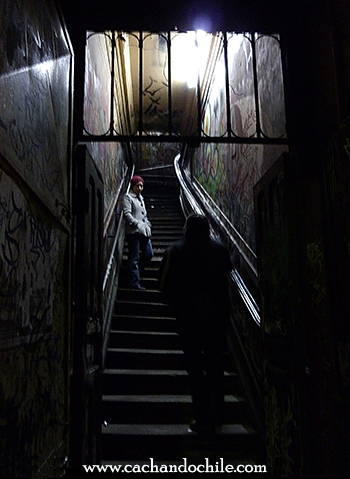 Despite having lived here “forever” it took a foreigner less than 2 days in Chile (that’s you @cfarivar) to find a place I’d walked by a zillion times and never noticed! So the other night, after an incredible Chinese meal at Mr. Wu (which I’ll leave for another post), the four of us were still enjoying ourselves too much to go home, and as we zipped along Alameda (Santiago’s main drag), I asked if anyone had ever heard of what had been described as an “unpretentious” bar called 777… and the next thing you know, there we were, standing in front of the entrance with no sign, a barely legible and heavily tarnished brass street number about 8 feet up, a tattered liquor license posted above that, and a steep and winding, dark, and heavily graffitied stairway leading to who knows where… END_OF_DOCUMENT_TOKEN_TO_BE_REPLACED

I love good graf. Graffiti art, street art, urban expression, bright colors, and freedom in design. And,in my opinion, Chilean graffiti is some of the best. As promised, I will be posting some of my “Good Graf” photos from time to time. (Remember Río Mapocho? And the “official” mural in front of Diego Portales?)

I love graffiti. Street art. Legal or illegal (with or without permission), I am happy to see artistic expression in spaces that would otherwise be blank or filled with commercial advertising. Of course I’m not talking about vandalistic magic marker scribbling, but rather true works of urban art. Chile has an impressive and particularly rich culture of urban art that stretches back for decades. Forget what New Yorkers have to say about subway graffiti in the 70s or hip hop in the 80s. Chile has a long tradition that not only tolerates, but even encourages, artistic expression in public places. END_OF_DOCUMENT_TOKEN_TO_BE_REPLACED