There’s a Chilean in my Closet! 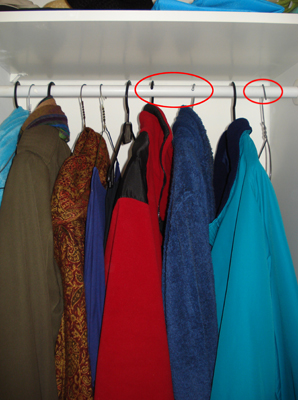 Guess who's hanging up what?

Whoever invented the wire hanger should have established universal rules for using it.

There are certain rules that seem to have been established arbitrarily at some distant point in time and space when someone made the first move and said, “I’m going to do it this way.” If you had asked why, they may have simply said, “No reason, I can do it the other way if you prefer,” or “because I’m left handed” or “because my sister was standing on the other side,” but for whatever reason the reason happened to be, their method ended up carved in stone and we don’t even think about it until someone upsets the balance.

Like what, you ask? Like driving on the right-hand side of the road, unless you’re a Brit-influenced driver, of course, and therefore prefer the left. Or whether the toilet paper drapes over the top of the roll or dangles from below. Or whether you draw a circle by moving toward the right or toward the left. I’m sure there are plenty of other practices that we could all indulge any latent OCD tendencies in, but today I think I’ll just dwell on hangers.

In my orderly little pre-Chile world, we hung things up with the hanger hook pointing toward the back of the closet. Never thought about it much. Wasn’t much reason to. Until I noticed that the woman I first lived with in Santiago would always hang things up “backward” as in hook facing forward,** toward the door.  Personal quirk, I thought. Until I went shopping and oddly enough, most of the stores did the same. The sales clerks glowered at me for hanging things up the “right” way. And when I started sharing a closet with my husband, we ended up with a mishmash of hanger-use practices that bugged me to no end but that turned out to be a non-issue for the Mister… And in his world, non-issue is synonymous with unimportant… which means not much chance for change… and I have more important re-training priorities (like the fact that plates should be washed on BOTH sides, but we’ll save that for another day…)

** How often do we see backward and forward meaning the same thing?

In my northern-hemisphere-oriented brain, the outward hook maneuver does seem to be more practical in that it only takes just one outward-downward movement to hang something up, rather than the push in, up, back, and down movement required for the “Chilean” method.

It is in my nature to try and make sense of things. Maybe, I thought, it’s because we’re on the other side of the world—like that bit about water in a sink swirling counterclockwise in the southern hemisphere (it doesn’t, by the way). Not even I, as originator of that cockamamie theory could muster up much enthusiasm for it. So I’m back to arbitrary. Not a very satisfactory answer.

I googled around for a while, searching for an answer to my relevant-to-not-much-of-anything question, and although I did find a few versions of the hanger’s rather recent invention (might have been US President Thomas Jefferson, could have been someone else in the mid-1800s, although Albert Parkhouse generally gets the most credit for having designed the first wire hanger in 1903. Too bad he apparently misunderstood the directions on the patent form and signed away his rights to the fortune his employer then received. Parkhouse never saw a dime). I also found a nifty voodoo coat hanger and a slew of hanger manufacturers, but not one who would take a stand on which way the hanger is “supposed” to go.

So let me be the first to go on record as saying that hanger hooks should definitely point toward the back of the closet… In my world. Because I said so. Even though my husband doesn’t believe me… Or care.

I was one of the 2, 204,462 passengers—nearly 37% of the city’s entire population—who used the Santiago Metro (subway) system on Monday,
April 20, 2009. And although the Metro’s official figures say that spatial density is 5.67 people per square meter, I, for one, can tell you with all the confidence in the world, that in the Escuela Militar Station at 7:30 pm, that was definitely NOT the case. It felt like all 2 million plus were right there, right then. 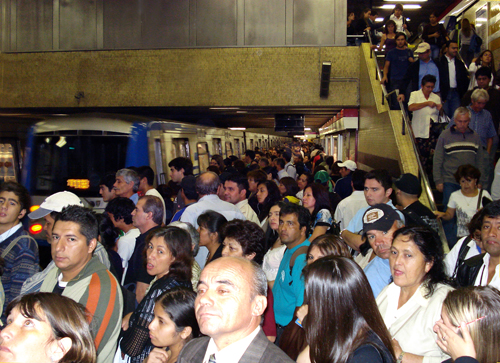 In fact, I generally try very hard not to take public transportation at rush hour. I even changed my office hours to avoid peak travel times and, whenever possible, I prefer to work at home.

I want my “metro cuadrado”
In Chile, when people speak of a need for personal space, they refer to their metro cuadrado (square meter), but the simple fact is, that in Santiago, there seems to be a lot of spatial exaggeration going on… WHO, in reality, has a square meter all to themselves? Not many. 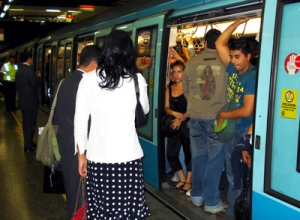 According to the official Metro Santiago web site,  Line 1, which runs through the center of town and most of the length of Alameda (including all of its corresponding name changes) has a daily density of 5.67 people per square meter. Think about it as a space that’s 1 meter by 1 meter, or just about 10 feet square (3.3′ x 3.3′). I’m no math whiz, but while that seems a bit close, it still means that each person (please correct me—anyone!) has a circle of about 1¾ feet in diameter around them… but that daily density must take in the average of all-day-everyday-including-Sundays-at-7 am when there’s only 1 person per car, cuz take a look at the freakin’ picture and tell me how many people are in any of THOSE square meters!

One of my favorite courses in grad school was on the anthropology of space, taught by a wonderful professor (Dr. Deborah Pellow) who had been a student of Edward T. Hall (the Hidden Dimension, the Dance of Time). At the time I enrolled, I thought it would be an interesting elective course, how little did I know how much it would come to shape my way of thinking.

Let’s face it. We (humans, that is) are territorial beings. Some more space than others, of course, but we all have a certain amount of distance—that free-space barrier that we need between us and the people around us—in order to feel comfortable and safe. Cultural differences in the amount of space needed vary tremendously, as just about any westerner has noticed upon coming to Latin America.

In a nutshell, Hall talked about proxemics as a way of defining our perceptions and sense of “ownership” of the space around us… who can do what and under what circumstances and within what distance.

Hall defines 4 spatial spheres and the amount of space that most North Americans need. (I would love to see the same study adapted to Latin America, specifically Chile, where those distances would certainly be smaller…Anyone have those figures?) 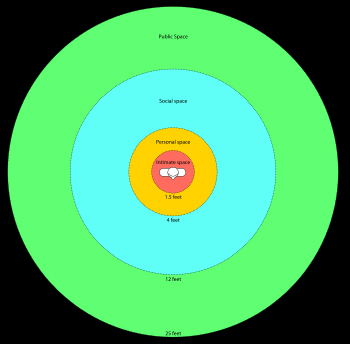 These are some important concepts for cultural understanding—on or off the subway—and I’m sure I’ll come back to them time and again.

For anyone who’s interested, check out the topic of “proxemics” in general and the work of Edward T. Hall in particular, especially The Hidden Dimension. It very much brought home certain cultural differences with regard to the amount of personal space one needs to feel comfortable. And I, as a gringa born and raised in the country, need a heck of a lot more space than most Santiaguinos at rush hour.