There are some great stories in Chilean wine, and Viña Von Siebenthal has its share. Wine-loving Swiss lawyer Mauro Von Siebenthal dreamed of making a wine of his own and set about turning wishes to reality in the Aconcagua Valley. END_OF_DOCUMENT_TOKEN_TO_BE_REPLACED

Another major part of Chile’s Fiestas Patrias—Independence Day celebrations—are the “fondas.” Also called “ramadas” because they are often made with branches (ramas) these temporary fairs are set up in parks all over the country for about 10 days of food, games, drinking, dancing, crafts of all sorts, and general good times to be had. Some of the bigger (and/or more rural) ones have rodeos and most will have cueca contests.  There are the municipal versions as well as some of the more popular ones such as the now-famous “Yein Fonda” (which in Chilean sounds just like the actress) and the Guachaca version full of cueca chora.

END_OF_DOCUMENT_TOKEN_TO_BE_REPLACED

Concón, one of Chile’s popular beach resorts, goes all out with murgas, comparsa, cueca, cumbia, ranchera, diablada, and bailes pascuenses to celebrate its 468 years of history.

END_OF_DOCUMENT_TOKEN_TO_BE_REPLACED

Posted on Saturday, September 5, 2009 by Margaret

Concón, one of Chile’s popular beach resorts, goes all out with murgas, comparsa, cueca, cumbia, ranchera, diablada, and bailes pascuenses to celebrate its 468 years of history. Continue reading → 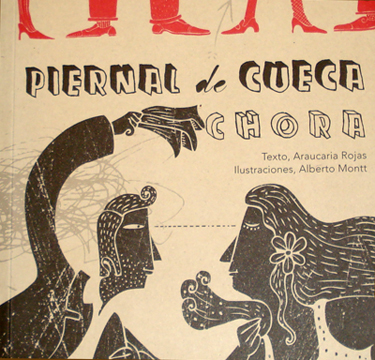 After years of having gym class-style dancing shoved down their throats at any and every cultural event, there’s a quickly growing movement among Chileans to take back the “real” cueca. The cueca that always existed.
The cueca that the  “rotos chilenos” proudly danced in the chinganas, fondas, and ramadas where people from the city and the port went to let their hair down, swill some chicha, hoist a few pipeños, sing a bit, and dance a lot. And that dance was the cueca. A dance that can take flirting to the edge of social mores—without touching—and that when done well, eye-to-eye and with just the right whisk of the pañuelo, turn of the head, tilt of the hip, and stomp of the foot, can bring a flush to the cheeks and set the heart aflutter.

The problem is that until just recently, that spirit of the pueblo cuequero was all but lost, buried under a 1960s wave of imported rock and then appropriated (and toned down) by the military right in the 1970s-80s in an attempt to impose, instill, and imbue “true national values” with an official and state-sanctioned version that involves a manly poncho-wearing huaso patrón who flirts with and wins over a demure and oddly dressed woman called a “china”… Yeah… exactly… No wonder no one I know ever wanted anything to do with it!

But there’s been a movement of late to take back Chile. To take pride in the real Chile. To take a stand and raise the pañuelo.
¡Éjale compadre!, put those hands together chiquillos, clap-clap, clap-clap, and tiki tiki tiki…
Get a guitar, a pandero (tambourine), and a voice and you’re good to go.
Find an accordion and there are definitely some hot times ahead. And there you are…. The cueca is hot and Chile is cool! ¡Chile es choro and la cueca es más chora aún !

Okay, so there’s a lot more to be said about how I feel about Chile in general and the cueca in particular… but all this has been a long-winded wind-up to the real topic of this post, a new book on how to dance the cueca chora.

Araucaria Rojas, daughter of the Gran Guaripola himself Dióscoro Rojas (drawing a blank? You’ve got homework: go study up at the Guachacas web site) and who is now finishing up a degree in history, just launched her book “Piernal de Cueca Chora” a guide to everything you need to hold your own amongst the choros, from the color of your pañuelo to just how high to hike your skirt.  ‘Piernal,’ in case you’re wondering, is one of those words invented by necessity because a ‘manual’ refers to something done with the hands, but in this case it’s the legs (piernas) following all the steps that are so explicitly described in words and images (illustrator Alberto Montt of “Dosis Diario” fame weighs in with his signature style). Cousin Camila Rojas edited the book for her newly-formed publishing company Quilombo Ediciones and came up with some pretty clever touches like resolving the twisted spine problem (English books write the title down one side of the spine and Spanish books, the other) by wrapping the book—along with a nifty stamped pañuelo—in a box that allowed her to print the spine in both directions! (¡Bien hecho Camila!).

The Santiago launch was held last night (Sept 1) at the 100% chileno bar Piojera (could there ever have been any other option?) with a dedication by the paternal Guaripola and the reigning royal Guachacas Queen Mónica Pérez and King Ricarte Soto, among others, followed by a few patitas de cueca, and a healthy round of terremotos and pichanga. Be sure to check out Eileen’s  bearshapedsphere version of the evening—she can even show you food & drink pictures because by that time I was much too busy sipping and munching to take pictures. An excellent way to kick of this month of fiestas a la chilena! 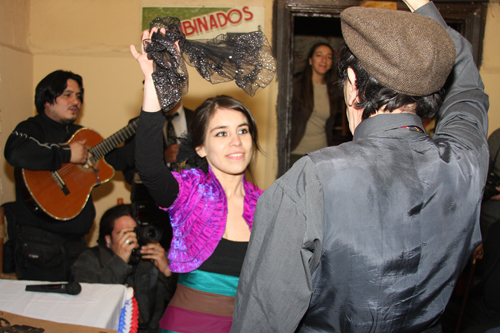 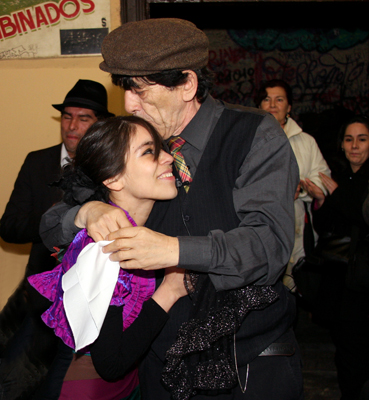 Matt Harding: Dancing Around the World

Matt Harding, the guy who danced his way (badly) around the world and author of the hoax that was not a hoax.

It’s Sunday morning and I’m listening to NPR (National Public Radio).  I hear a piece on Matt Harding, of Where the Hell is Matt fame. This guy travels the world and puts up videos of himself happily–though badly–dancing on You-Tube.

What does this have to do with Chile, you ask? Not all that much, but he’s been here in Chile, danced on Easter Island (yes, that’s part of Chile), and his project is really cool, so please bear with me!

He’s one of those guys who seems to glide through life on a sense of humor, dumb luck, and a healthy dose of right-time-right-place. He quit his job, slung a backpack over his shoulder, and set out to see the world (literally) in 2003. Somewhere along the line he had the bright idea of doing a dumb dance on camera and posting it to his web site. You Tube lofted him to new heights, a gum company sprung for further travel-dances, and the dream career he never knew he wanted was launched. He’s been traveling, dancing, and uploading videos ever since!

His 2006 video proves he was in Chile (on Easter Island, 2 minutes in). He’s also posted his notes on his trip through the Southern Cone.

All well and good. Fun guy, nice gimmick, found his niche and the way to follow his heart’s desire on someone else’s dime. Cool…

Matt, it turns out, is a prankster, and he came up with–get this–not a hoax (anyone can do that), but a HOAX of a hoax… Sheer genius.

Spurred on by comments on YouTube that claimed his video was a green screen and Photoshop scam, he decided to come clean. Speaking before a large audience at the December 2008 EG Conference he confessed his sins and revealed all the secrets behind this elaborate viral ad campaign. That he was an actor and afraid to fly. That Photoshop was, indeed, and essential element in his video-making process. That the project was top secret and his sponsors (Buzz!Brain) couldn’t risk hiring loose-lipped actors to dance with him, so they spent $5 million building 100 animatronic puppets (electronic robots). That they had sunk a stripped-down Boeing 727 in a swimming pool to mock up the weightless dancing scene ($17 million). And to eliminate any trace of a doubt in the audience’s mind of what he was up to, the still straight-faced Harding concluded with a pie chart that revealed a budget that included expenditures for robot uprising insurance, animatronic masseuses, hush money, and hair extensions. His audience rolled on the floor!
Man, did those Photoshop conspiracy theorists look dumb then!

But here’s the irony… EG uploaded the video(Matt Harding-Where the Hell is Matt an Elaborate Hoax), Digg picked it up (Matt Harding: Where In The Hell Is Matt? It’s a Hoax), and Jaunted, who had not bothered to read beyond the headlines, put it in their Hoax category (Matt Comes Clean: He Was Faking It All Along and it just spiraled out from there.

The media had fallen for the gag and unwittingly (or dumb-wittedly) played its part in propagating the hoax that was not a hoax and the not-hoax that turned out to be one!

—————————
PS:
I just discovered a couple more links worth adding. It seems that when Jaunt figured out that it was a joke, they came back with “we were joking too”… But they did an interview with Matt that bears checking out: Matt Harding Tells Jaunted All About His Real Dancing Videos

And in the course of that interview, I came across a spoof of Matt at Funny or Die. It takes a while to download, so be patient. And just for the record… it’s a hoax!