There’s no denying it. One of the things that never seems to attract the attention of foreigners to Chile is the omnipresence of its street dogs (quiltros galore!). Guest poster Kathleen Skoczen is no exception. In Part 1 (Santiago by Bike) of this 2-part post, she described what she saw and thought as she rode her rented bike through the heart of Santiago and visited the Museo de la Memoria. She dedicates Part 2 to the life of dogs and, like the good anthropologist that she is, reflects on the human element that weaves the place of dogs into Chile’s cultural fabric.

The life of dogs… 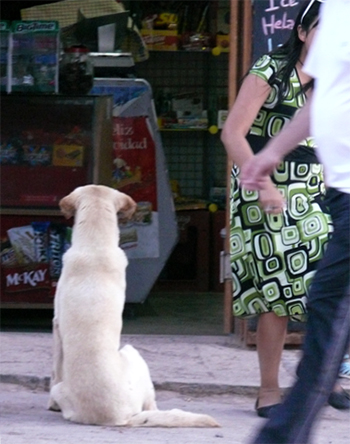 My very good friend in the Dominican Republic, Kim, and I had a discussion one day, as we often do when we are visiting together after months and sometimes even years of absence. She is the patron saint of animals in the Dominican province where she lives. Although not a certified vet, she does more for animal welfare in the province than all the other vets—okay, than the other vet. As an anthropologist interested in human health and well-being, I watch her tenderly and lovingly care and mend animals (homeless, flea ridden, mangy beyond imagination) and think, “there are lots of children who could benefit from this kind spirit.” When I finally gave voice to this observation, my friend assured me that taking care of animals is taking care of people.

“How is that?” I asked. Kim explained that instilling a sense of humanity and humility when it comes to animals easily translates to empathy and compassion for fellow human beings. It took me a while to agree that tending first to animals will somehow translate into improving life for the average poor, stressed Dominican family, and indeed, I still have a hard time with the concept. However, what I can say is that the status and health of animals, at the very least, is a reflection of the overall health of a society.

In Chile, while some Chileans have told me that theirs is a third world country (see more on that issue here), there is no evidence of that in the places I’ve traveled. A good indicator here is status of dogs, and dogs, as anyone who even passes through ever so briefly knows, are everywhere in Chile. On the one hand, why are they so omnipresent? And on the other, OMG, they all look fat and happy! Never mind that they are, sin duda, the friendliest dogs I’ve ever, ever encountered. 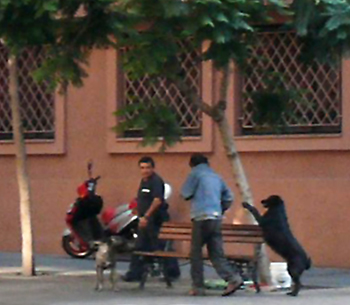 In the few weeks that I’ve been here, traveling throughout Santiago and a bit north and south, I would venture to say that I have seen hundreds of dogs in the streets, and of those, just two who were timid when approached. Having witnessed dozens of dog encounters, I have heard dogs barking or scrabbling fewer than a half dozen times. But after a while I began to wonder if it was indeed such a wonderful thing.

Who does take care of these dogs? Maybe they don’t need baths, but don’t they need vaccines? I understand there is a bit of debate about whether the Humane Society should come in and round up these dogs, provide shelters and food, but others think that they should let them be. I can fully appreciate this debate. They don’t look ill, they don’t act ill, and frankly I have a chocolate lab at home who spends most of his time lying around my house hoping I’ll take him for a walk, which, let me say with some major guilt, happens all too infrequently.

These Chilean dogs that are unleashed and presumably un-owned, frolic in the parks, sleep on busy street corners, and got the full attention of at least one 19-year-old gringo (my son) who couldn’t resist scratching and petting them at every opportunity. Based on his success, these dogs are well accustomed to such indulgences by passersby. We did see one beautiful purebred German shepherd chasing bikes on Las Monjitas. I wasn’t sure if it was someone’s dog or a stray, but it needed some discipline that’s for sure.

Are these dogs really better off on their own? There are so many of them, and while they are, I’m told, often fed by shopkeepers and workers, is there someone there for them on days off? Do they suffer from fleas? Where are their winter homes? While Cocoa (my lab) might not exercise enough, he does know where his next meal comes from and when, and when there’s a storm, he’ll be safe and secure. Is life on the streets the destiny of man’s best friend? To fend for himself?

I rented a bike in Santiago and stopped at the Museo de la Memoria (I highly recommend it, see Part 1: Santiago by Bike). After soaking in the details of this period, (this museum goes far beyond any textbook description) I found it hard to see Santiago, the neighborhoods, and the people in the same breezy light of a tourist.

I had been told not to miss the mansions on that side of town, and so, dutifully, I headed in that direction. Ironically (and probably very lost) I came across a Zona Militar and couldn’t help but stop and contemplate what that meant as I examined the houses looking for signs of the military. I lived in Santo Domingo for two years (1985–1987) during Balaguer’s second tenure as president of the Dominican Republic (1986–1996) and was routinely confronted with army vehicles blazing through the streets, which always seemed to be more theater than threat I thought. In Chile, during this same era, those vehicles blazing from a Zona Militar undoubtedly symbolized something quite different. 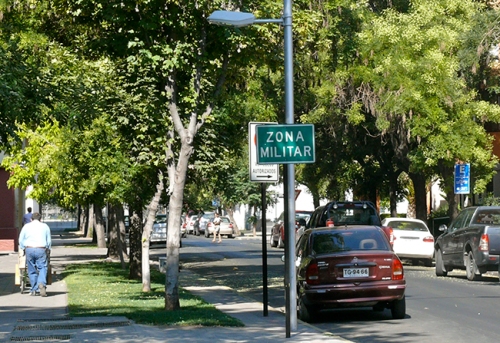 "Zona Militar" (military zone) on southwestern side of downtown Santiago.

I gave up my quest to find the mansions and headed toward El Centro and my temporary home.  I stopped in a park, unnamed on my map, and admired the largest trees I’ve seen in Latin America. Out of the corner of my eye, I caught sight of a small group of dogs wrestling away. Riding on, I passed three women trying to calm and control 7 or 8 dogs as I rode by—presumably more dogs who haven’t given up their love of moving wheels. So many dogs…

As I wound my way through the city with everything I had seen in the Museum and thoughts of Chile’s coup and its aftermath still weighing heavily on my mind, I wondered if it just might be that giving these dogs such freedom, with its burdens and joys, is something that people “need” to do. The wounds of Chilean struggle for liberty are still healing–they seem to be tender and fragile–and I wonder, do people resist denying their most loyal companions the same freedom they themselves once lost? These dogs are happy and friendly beyond belief; that they enjoy frolicking in parks, sniffing each other, marking territories, and yes, even indulging in the occasional garbage can is truly undeniable. They ask very little from the people who walk around them, often ignore them, and at times completely indulge their need for human attention. And it occurred to me that the memory of 17 years of oppression and struggle for their own freedoms still within living memory may be part of the reason Chileans seem to be so unwilling to imprison “man’s best friend.”

Chile is Not a Third-World Country and other impressions

And while we’re at it, take a look at Eileen Smith  has to say about Santiago over at Bearshapedsphere: Santiago in 36 hours and what happens to a pitch deferred.

Pitbull free to roam: the flip side of the Chile’s street dog issue

Bicentennial Chile Dog: And we have a Winner!

In Search of the Bicentennial Chile Dog