Winning a World Cup match has a way of putting smiles on peoples faces, and all of Chile is happy this morning! 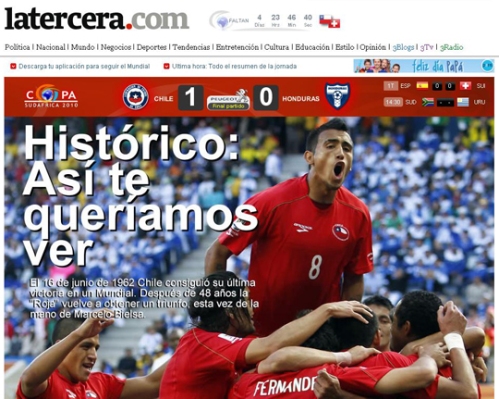 La Tercera splashes the news: Historic Win: that's what we want to see!

Doesn’t matter that it’s a cold, gray, drizzly, dreary day in Santiago. The streets are filling with happy people in silly red, white and blue hats (Chile’s national colors), blowing their red cornetas (Chile’s own form of vuvuzela), draped in flags, and deciding whether to really go to work or school or just keep reveling in the streets.

I admit, I know next to nothing about fútbol (yes, I’m a gringa, but I live in Chile, and there is most definitely nothing called soccer here), but what I do know is what makes a country happy. And Chile loves fútbol. Even though I may not really understand what’s going on on the field, I can plainly see (and hear!) how it affects the state of mind of so many of the people around me. And believe me, Chile has World Cup Fever! People have been preparing for the Copa Mundial for weeks months.

I’d love to know how many old TVs were traded in for new big flat screens in recent weeks… I’m sure the number is staggering! My father-in-law bought one to take to work so his employees could watch the game. Another friend mentioned that they had just bought a bigger set to watch in HD. Reminds me of the stories of the 1962 Mundial–played in Chile by the way–and Chile came in 3rd–just in case you’ve never been to Chile, because if you HAVE been here that fact would’ve been drilled into your head on the first day. Television was new to Chile in those days and many families bought their first set ever to watch the games.

To add to the excitement–this is the first time that Chile has won a World Cup game since 1962(that’s 48 years, by the way) and the first time ever outside Latin America–Are you cachando (getting)  the picture now? (¿ya estás cachando lo que significa?).  Google has just informed me (as it so often does) that some 5,000 people gathered in the Plaza de la Constitución across from La Moneda to watch the game together on a huge-screen TV and that about 3,000 of them have now headed over to Plaza Italia–Santiago’s traditional celebration and protest center–and this on a cold, damp workday-school day Wednesday morning and competing with the delayed rush hour traffic.

Yes, Chile has Fútbol Fever–and there will be no cure until the final game is played on Sunday, July 11. Something tells me that Monday July 12 will be one of those hung-over, get-nothing-done Mondays like going back to work after a long vacation.

Chile will play next against Switzerland on June 21 and against Spain on June 25.  ¡Vamos Chile!

For Great Pictures of the event at la Moneda and great shots of some of the 5000 people who showed up in the cold and drizzle to share the fun, see Eileen’s post on Bearshapedsphere:  Chile vs. Honduras, World Cup and seeing a happy city!

For background on the lead up to the cup, see: Chile + Fútbol = South Africa World Cup 2010!