I suspect that anyone who has done any amount of traveling outside their comfort zone is familiar with the acronym “BYOTP.” For those who are not, let me spell it out for you, because if you’re a woman in Chile, this is going to become pretty important: Bring Your Own Toilet Paper.

Of course this is an odd—less than delicate, shall we say—topic, but let’s face it, there are things that a traveler just needs to be forewarned about, and the whole idea behind Cachando Chile is to let you in on the things that no one else ever bothers to mention!

And since Eileen kicked it off today with her piece on “The Case of the Hot TP,” I figured it’s time to pass on a bit of advice for newbies that I’ve been planning to haul out at the right time… and it seems there’s no time like the present.

Here’s the news you don’t want to hear: many Chilean restrooms do not come stocked with toilet paper, which, by the way, is generically referred to as “Confort,” (Spanish for comfort). It’s the most popular brand name, so it’s used for all “papel higiénico,” much like we say Kleenex instead of tissues in the US.

I once commented on how strange I thought it was that all the restrooms I’ve ever seen do in fact have a TP holder, but no roll. My friend said—as if it was the most obvious thing in the world—that it’s because people steal the rolls. “Really???” And she “Reallyed??” me right back because she could not believe that I had never taken a roll of paper from a public place… and I SWEAR the thought had never, ever crossed my mind!

But she may be right… so the paper is unavailable because either someone just before you now has it in her bag, or those in charge got tired of restocking all the time. 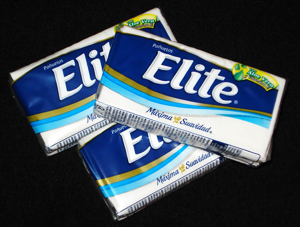 So… first rule: be prepared. And no, that does not mean you have to carry a roll around (although there seems to be plenty of that to go around). Little packs of tissues (not called Kleenex, but pañuelos desechables, are available in just about every store, kiosk, and street vendor around. Heck, I bet even Eileen’s contraband TP dealer has his stock on hand if you’re jonesing for tissues!

It’s also still fairly common to have women restroom attendants in some places. You may have to pay a fixed price to use the facilities ($100 pesos or so) and she will hand you a big pile of neatly folded paper—often dyed some garish green or blue to hide the fact that this is about as rough as paper can get and sometimes even has little wood chips in it… (those pañuelos desechables are beginning to look pretty attractive now, aren’t they?) 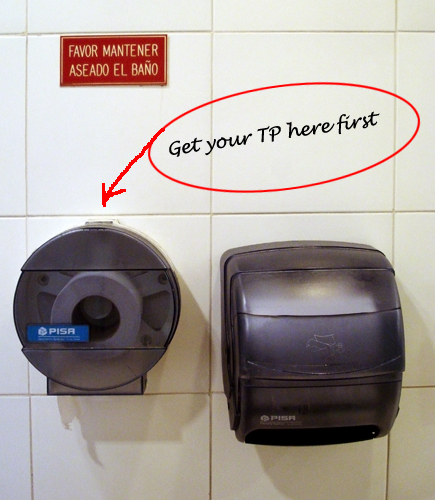 A more modern and increasingly common variation is the giant roll on the wall outside the stall, usually next to the paper towels… Obviously the trick is remembering to grab your paper before you lock yourself into your stall—or at least checking the paper roll before you close the door—but don’t worry, it becomes a habit quickly enough.

You laugh now, but these warnings and suggestions, when not heeded, can make for some very uncomfortable “what do I do now” moments!

But wait! That’s not all!

As long as we’re going down this odd-but-necessary road, there are a couple other little tidbits to share about bathrooms—like what to call them, so let’s have a vocabulary lesson!

You may ask to use the baño (bah-nyo) at someone’s home, although many people seem to prefer the euphemistic request to “wash their hands.”

The word Baño is also acceptable in a public place (¿Donde está el baño?), although this too, is often lightened up by calling it the Servicios, (pronounced sair-VEE-see-ohs), WC (vay-SAY), Water (WAH-ter), or even Toilette. And, as long as you’re in Chile, you can forget about words like “Inodoro” or “Excusado” that your Spanish teacher or guidebook told you about; you won’t hear them here, although Taza (TAH-sa) might come up.

And to finally bring this essential vocabulary lesson to a close, when you’re done, be sure to “tirar la cadena” (tee-RAHR la kah-DAY-na) literally “pull the chain”… which has nothing at all to do with yanking your chain—and I assure you I am not—although I doubt you’ll find a “Water” with a real chain anymore, although quite a few have a button-style flusher either on type or one the side of the tank.

OK- just a quick hop back to the TP thing again… Don’t be surprised to find a sign in the stall asking you NOT to throw paper—and that includes toilet paper—into the toilet. Seriously. Use the little waste basket (always provided) for that purpose. Gross, you say? Yeah, but think how much worse it is when the system gets all clogged up because whatever it is that deals with these things isn’t up to the job! This is particularly true in rural areas and even in older buildings in downtown Santiago. I strongly urge you to heed this advice. You really don’t want to have to outrun the overflow.

As I was wrapping this up, I was curious whether anyone had written about restrooms in Chile before, and came across this odd little site: www.restroomratings.com. You guessed it, you can rate your experience for just about any restroom in the world. Chile? Only 1 rating so far, and that’s for a one you surely don’t want to visit in Torres del Paine.

I’m sure there’s plenty I’ve left out, and I’m looking forward to your comments, but what say we don’t get overly gross about this, ok?

14 responses to “BYOTP in Chile”