Sandro: Adios to a Legend 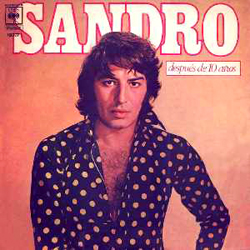 Latin America is in mourning today. Argentine singer Roberto Sánchez—much better known as Sandro—has died. His fans waited in long lines outside the National Congress in Buenos Aires tonight to say their final goodbyes, and the government has announced that the building will remain open all night to accommodate the millions who have made the trip to honor their hero.

The dark and steamy “Latin Elvis” began his singing career in the 1960s and has driven his mostly female fans wild for more than 40 years. Tonight’s news showed these aging fans, or “Nenas de Sandro,” grandchildren now in tow (as well as many impersonators), clutching prized photos and mementos, weeping in the streets, outside his home, and waiting in the searing sun (followed by evening rain) to file past his coffin.

Born in Buenos Aires in 1945, Sandro was one of Latin America’s first singers to venture into the field of rock, although he later developed his own melodramatic-romantic style of very latino love songs and ballads. In his early years he was inspired by Elvis Presley—and dressed in tight pants and a ruffled shirt, he took his idol’s quiver and shake to heights Presley never dreamed of. Check out the action—from twitching toe to writhing torso—in the opening segment of his 1975 performance of his hit song “Rosa Rosa” in Viña del Mar…

I’ve been hearing about Sandro since I first met my husband, who told me the news with a long face this morning. How he began his career as a young teenager in the 1960s and was huge in the 1970s, how he was known as El Gitano (the Gypsy) for his sultry dark and handsome look, what a great voice he had, how romantic his songs were, how many people swore they fell in love to the sound of his voice and the words to his songs . In fact, the Guachacas blog posted a piece in his honor tonight that said:

How many Chileans owe their very existence to Sandro’s seductive powers? He is one of the few people responsible for our own baby boom in a decade in which freedom and romanticism played hide and seek. (translation mine) 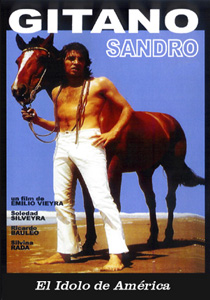 I have also been told (repeatedly) how he wrote all his own songs, recorded 52 albums, and starred in some 16 movies over the course of his 4-decade career. And then there’s the part where his fans haunted him day and night until he finally built a bunker-like complex in Banfield outside of Buenos Aires and hadn’t left his house more than 3 times in 10 years. And how he smoked 4 packs a day and still managed to keep his voice,  how in later years he adapted a special microphone with a tube that blew oxygen to his mouth so he could keep singing despite his ever-worsening emphysema, and how he was on a waiting list for a lung transplant.

He finally had his surgery—a heart and lung transplant—in Mendoza in November. His Nenas and other fans formed and joined “prayer chains” (cadenas de oración) for his health. At first his recovery seemed to go well and hopes were high, but he took a turn for the worse. At 8:40 PM on Monday, January 4, 2010, Sandro, aged 64, made news for the last time.

Want to know more about Sandro?

Watch the news over the next few days, the TV (at least here in Latin America) will be full of stories, biographies, documentaries, and old movies in his honor. You’ll find dozens of his songs on You Tube or take a look at Wiki: Sandro de América, for starters.

2 responses to “Sandro: Adios to a Legend”