September 18, 2009: Chile celebrated the 199th anniversary of its declaration of independence and simultaneously kicked off its countdown to its Bicentennial.

The entire country pretty much shuts down for a week or so come mid-September. Independence Day is on the 18th (a Friday this year), and the 19th is also a legal holiday in honor of the military, but which most people just consider a “recovering from the 18th day). You might think that 2 days would be sufficient to celebrate—but you’d be very mistaken.

The first signs of National Pride Frenzy begin to appear in early September when all the flag-colored red-white-and-blue decorations go up and the first street vendors appear with little flags that drivers attach to insides and outsides of their cars. Store workers begin to wear their September uniforms and dress up as huasos and huasas. School children practice their traditional dances and shop windows fill up with traditional little flowered huasita dresses for the girls and little black suits and chupaya hats for the boys. Most people hang (rather than fly) the flag from their home. Flag display was mandatory during the military years and therefore fell out of favor for many years, but there seems to be an ever-increasing number of homes sporting flags these days as we creep ever closer to next year’s Bicentennial.

The weekend before the 18th kicks off the fonda season, during which the parks fill up with stands offering games, pony rides, music, dance, and plenty of traditional foods: empanadas, skewered meats (anticuchos), and choripanes (chorizo sausage sandwiches) and drinks, particularly chicha (a very sweet partially fermented grape almost-wine).
(For more about fondas see “Chile’s Fiestas Patrias: Fondas for September“.)

Overall production slows visibly the following Monday and declines steadily as the week wears on and the anticipation of the festivities gear up. Most companies close entirely at midday on the 17th—often for a company barbecue party.

Fiestas Patrias is a celebration of family, friends, food, and tradition as much as it is about national pride. It is also a celebration of spring, and the newly blue skies fill with kites, the backyard grills fire up, and the patio furniture gets dusted off.

We celebrated this year in the most traditional way possible: surrounded by good friends and family at a backyard asado (barbecue) that started in the early afternoon and lasted til nearly midnight…just like millions of other Chileans throughout the entire country.

Choripanes (sausage from Chillán on a bun) come off the grill and are served with chicha while we wait for the real meal to be ready.

Choripan takes the edge off while waiting for lunch 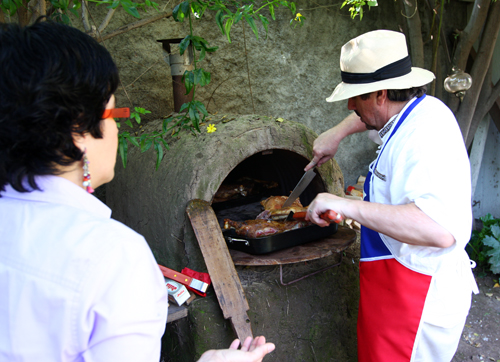 After an enormous (and delicious) meal of lamb, a wide assortment of salads, and plenty of red wine, it’s time for dessert: 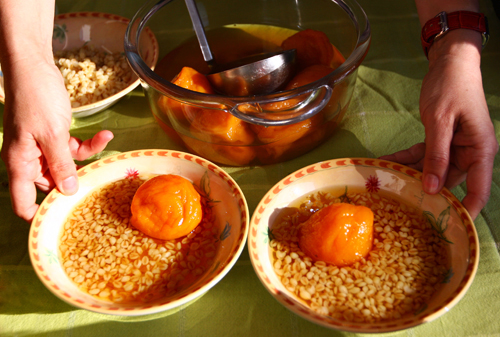 Mote con Huesillo: a traditionally refreshing dessert of wheat and stewed dried peaches in their juice 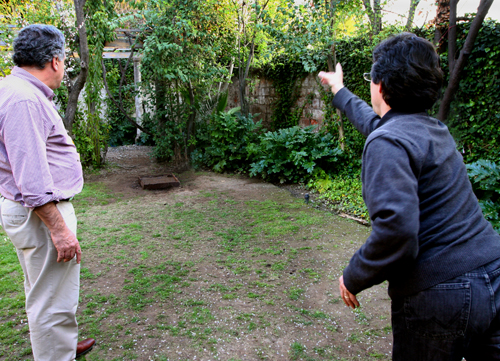 Rayuela (the home version): the disc closest to the center of the string wins

As night falls, the lamb makes a reappearance–this time in sandwich form, we relax, chat, and then the dancing begins!

Cueca til you drop!