Concón, one of Chile’s popular beach resorts, goes all out with murgas, comparsa, cueca, cumbia, ranchera, diablada, and bailes pascuenses to celebrate its 468 years of history.

Sunday, August 30, 2009.  The party continues. Last night Concón celebrated its 468th anniversary with influences from Brazil (samba-esque Comparsas), Colombia (cumbia), Mexico (rancheras and Marco Antonio Solis impersonator), but today it’s all about Chile, with dances from the north, south, center, and even Rapa Nui (which you may think is called Easter Island). (See part 1 of Concón Celebrates here).

But first a bit about the motives behind all this festivity and pageantry. Yes, you knew it was coming… just a little bit of history.

468 years. That’s a long time in the New World. As a point of reference, New York City’s disputed founding date centers somewhere around 1625. Here’ we’re talking about August of 1541, which is pretty impressive considering Pedro de Valdivia had only claimed the territory for the Crown a few months earlier, in February of the same year! It seems they were extracting gold from the Estero Marga Marga (which is now in Viña del Mar) and set up a shipyard in Concón to build a brigantine (a fancy 2-masted sailing ship) to get the haul back to the homeland. Good idea; not so good results… it turns out that there was a mutiny of sorts and the ship got hijacked along with the gold and that was the end of that, but the shipyard continued to operate, along with the Hacienda de Concón there in what was known as Puerto Concón.

Other highlights in its long history include the bloody Battle of Concón in 1891 during a Civil War—approximately half of the 8000 men were killed or injured. Happier times lay ahead, however, and it was named a comuna (municipality) under Limache in 1899 and later switched to fall under Viña del Mar, and only recently, in 1995, did it become the fully independent Ilustre Municipalidad de Concón.

Concón has been a popular seaside vacation spot since 1917 and expanded greatly after the coastal route from Viña to Concón was completed in 1930. The most recent census (2002) showed a population of 32,273 people, pretty much divided miti-miti (half and half) men and women.

Want to know more? You can find plenty more information at the city’s website: www.concon.cl

Ok, so now for what you’re really here for… the pictures!

Next came the Grupo Folklórico Here-Taina, which celebrates the culture and dance of Rapa Nui, the Chilean island territory better known elsewhere as Easter Island.

This is a dance group from Concón that performs dances based on those of northern Chile.

Unfortunately I do not know their name (If you know, please tell me so I can give them their due credit!) 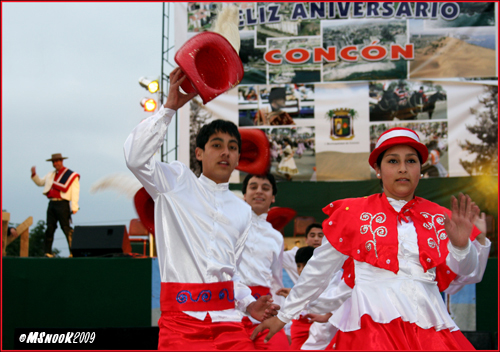 As night fell, the guest group Fantasía Folklórica Chilena de la Comuna de Maipú performed a “Diablada,” a traditional dance of Andean cultures in northern Chile as well as Peru and Bolivia. In Chile it is best known in association with the celebration of La Tirana on July 16. 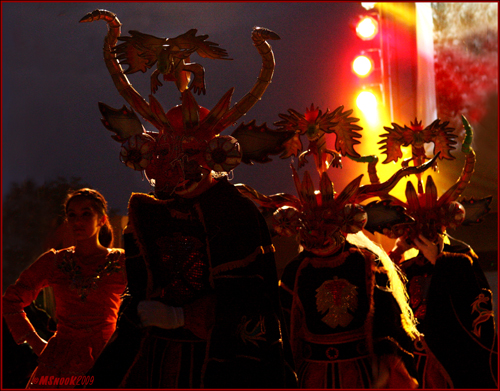 The show wrapped up with a lively round of cueca and blasts of chaya (confetti). 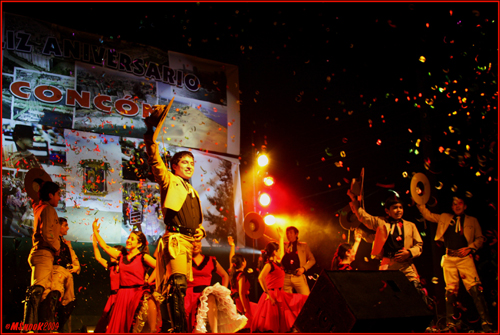