Chile by Air (and coolest job in the world)

I love my job. I write about wine and food (in that order) in a gorgeous country squooshed between two—yes TWO—mountain ranges (the Andes and the Coastal Range),  double-lined by the Pacific Ocean on one side and Argentine pampa on the other, then capped top and bottom by the Atacama Desert, a sparkly volcano-studded Lake Region, and the wilds of Patagonia, but why stop there? Let’s throw in a slice of Antarctica and a couple Pacific Islands to boot (Juan Fernández, of Robinson Crusoe fame, and Rapa Nui, better known as Easter Island in gringo speak).

I love my job—it bears repeating. Sure, there are days when I sit at my desk for 16 hours and move nothing but my fingers over the keyboard (that’s why they call it work), but then there are days like today, when this work takes me to places that even my Chilean husband doesn’t know.

Colchagua based Viña Casa Silva decided to launch its latest wine—Cool Coast Sauvignon Blanc—by inviting a small group of wine writers to visit their young vineyards near the coast of Colchagua. This is a big deal. They literally broke new ground—new terroir—with this project by daring to plant this close to the so-cold-it’s-cool coast in a region where no one has ever grown wine grapes before. As pioneers, they’ve earned their bragging rights… and this was no time to slouch.

So they ordered up an absolutely gorgeous day and put a dozen of us on a little 12-seater and flew us to the Colchagua coast… Here, let me show you… Come on along for the ride: 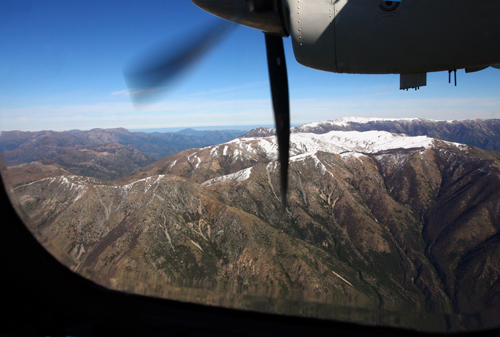 The layers of fog that accumulate between the irregular Coastal Mountains moderate temperatures and provide moisture for an area that is otherwise quite dry. The greenery is the result of winter rains; at other times of the year, the hills are dry and brown.

The Coastal Mountains, with the snow-topped Andes just visible in the distant right. (Photo © MSnook 2009)

When we reached Colchagua 110 miles south of Santiago, we turned west toward the coast, following the tongue-tangling Tinguiririca (Ting-geer-ee-REE-ka) River to the sea for a better-than-birds’-eye view of the valley from the Andes to the Pacific.

The mountains start to smooth out and the land flattens near the coast.

It’s hard to imagine a more breathtaking coastline. Just a few miles north is Pichilemu, one of the surfing capitals of the southern hemisphere.

Landing at the Vichuquén Airport (that’s it with the orange roof).

Casa Silva’s 4-year-old vineyard near Paredones, just 5.5 mi (9 km) from the sea. 40 hectares (99 acres)–half Sauvignon Blanc and half Pinot Noir–have been planted on the sandy-clay hillsides that ring the reservoir and on the lower-lying lands that surround it. The Sauvignon made its debut today; the Pinot–ever the diva–will hold out another year to make its grand entrance.

Westward (and lunchward) bound, we headed straight to the coast to Bucalemu, with a dramatic weather change just a couple of miles up the road from the sea. This fishing village had been clear all morning and the cloud cover rolled in just before we got there.  Though the coastal air was still thick and soupy when we left a few hours later, the sun was still shining just a couple miles away from the coast itself.

The Colchagua coast: Saint Peter and the seagulls in the fishing village of Bucalemu. (Photo © MSnook 2009)

So… what’s not to love about a job that let’s me spend the day doing this and calling it work?

To find out more about the wine, go see: Casa Silva puts Colchagua’s Cool Coast on the Map